The team at Cervinis Auto Designs have been extremely busy the past few months creating the newest, most aggressive style hoods while still keeping functionality and design in mind. Not only did they create the ultimate GT500 style heat extractor hood for the 2018-2020 Shelby GT350, and then 2013 – 2014 Mustang S197, but they killed it with releasing a 4 inch Cowl for the 1999 – 2004 Ford Mustang and the 2015 – 2020 Ford F150. They wont make you wait long for purchasing the new hoods. The release for the two 4 inch Cowl Hoods will be immediately following their unveil at the Carlisle All Ford Nationals. The GT500 style hoods will be released shortly after Ford Nationals, with a tentative date in late August. You can head to www.cervinis.com to view all of the newest releases and see their full line of products for your ride. 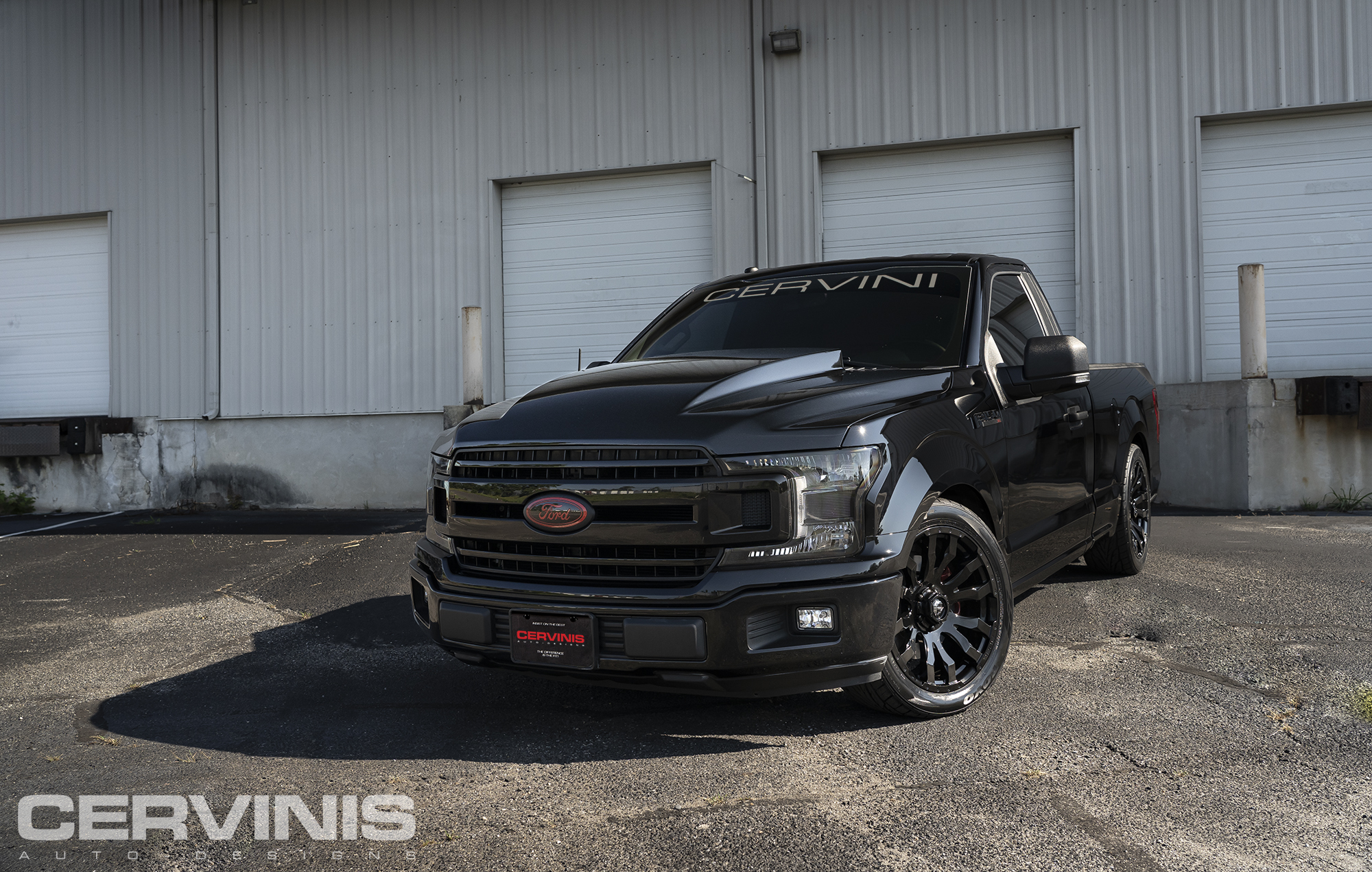 Through out the month of July, Cervinis teased of new product and hoods on their site and social media channels, all pointing towards the GT350, 13-14 Mustang S197 and SN95 New Edge. The release of a 4″ Cowl Hood for the 2015 – 2020 Ford F150 came as a surprise for all F150 enthusiasts. It is the next mod that you didn’t prepare for, but now have to add it to the top of your list. With the rugged off-road truck being the traditional main styling focus, this hood was created with the modern street truck in mind. The 4 inch Cowl Hood is a fully functional cowl, with maximum under hood clearance and a fully screened rear for heat release. Cervini’s has thought of it all, creating a fully finished underside that eliminates the use for an underside liner and allows it to be painted and finished for creating the ultimate show truck. Paint options are available for the Cowl, with all Ford Factory colors available with an additional underside paint option. To order yours today, you can visit Cervini’s site here.

Following the release of the F150 Cowl Hood, Cervinis created a 4 inch Cowl Hood for the 1999-2004 SN95 New Edge Mustang’s. With the same functionality and style as the F150’s 4 in Cowl, Cervini’s just changed the game for all SN95 owners. Prior to the release, they only offered two Cobra R Style Hoods with a max height of 2.5″. This brand new 4″ Cowl will now allow clearance for the largest displacement superchargers in the industry, contrary to what their 2.5″ cowl offered. The fully finished hood features a finished underside, allowing the elimination of an underside liner and a show quality finish. The rear of the Cowl facing the windshield features a mesh screen built into the hood, allowing for max heat to leave and maximum cooling. At special request, Cervinis allows their hoods to be manufactured for lift-off versions which will allow you to bring this to the track with you and save on weight, and have ample clearance for all mods. To purchase this new hood today, you can visit Cervinis site here. 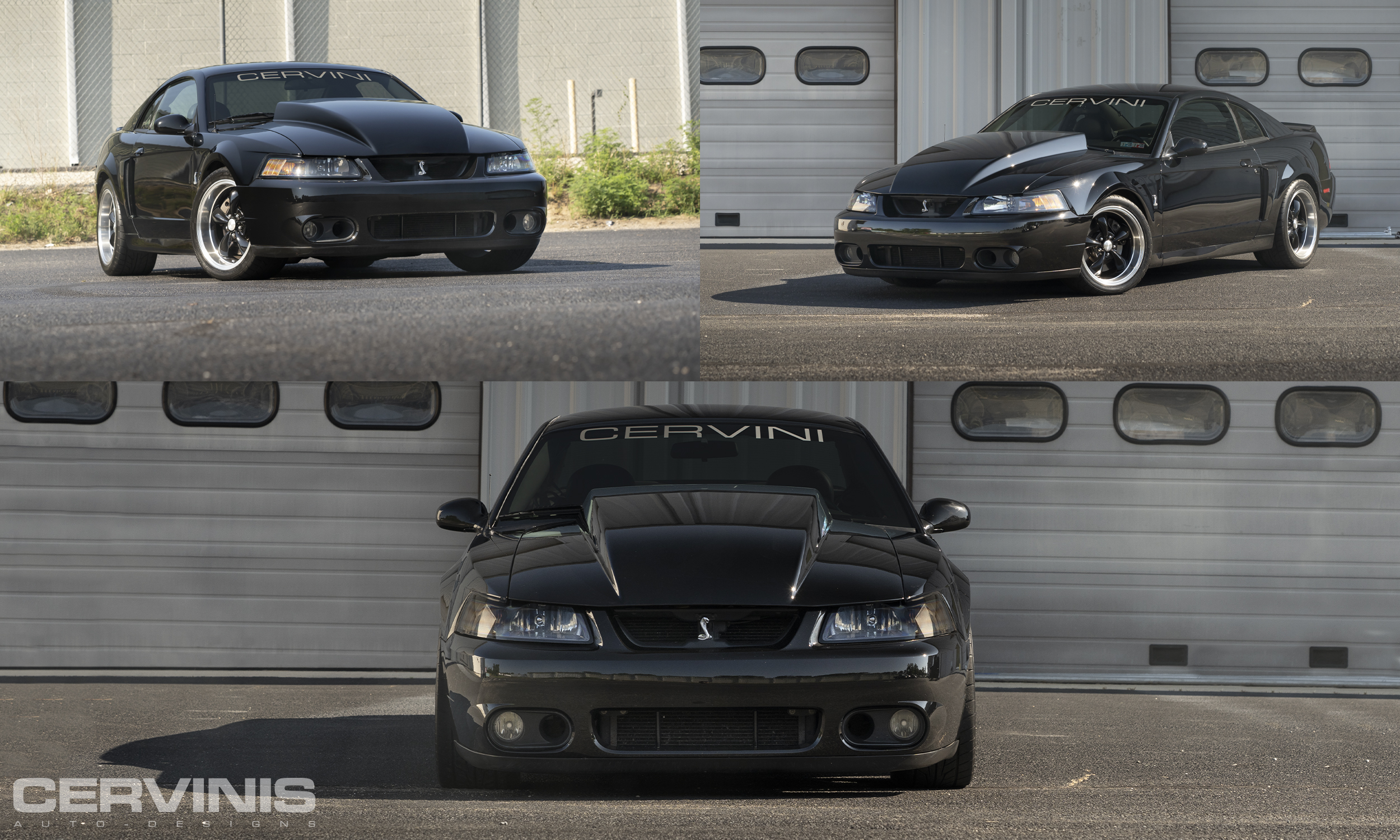 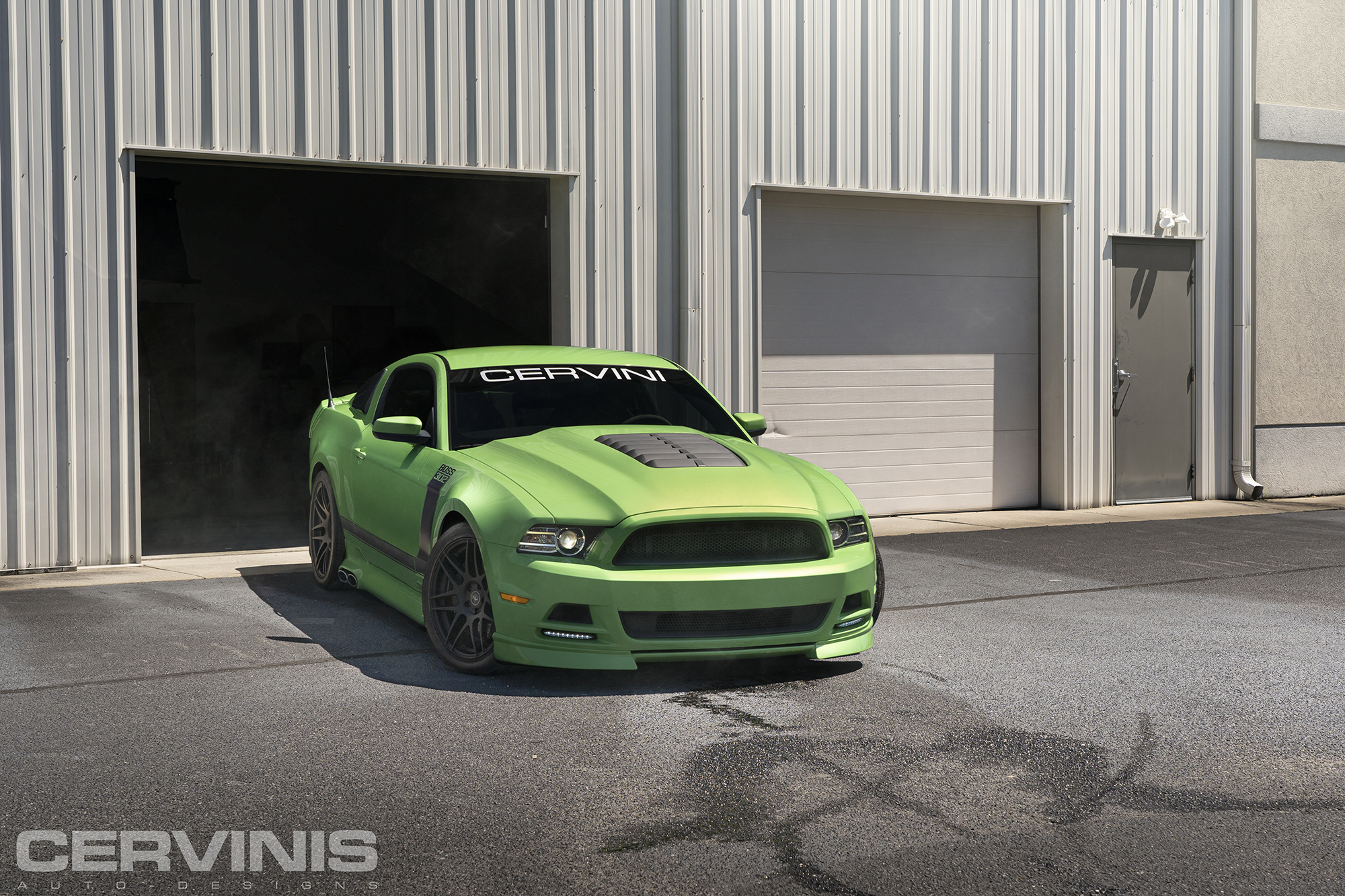 Late last Fall, Cervinis changed the game. They released a GT500 Style Hood at their Meet & Greet for the 2015-2020 S550 Mustangs. Many enthusiats requested the Gt500 style Heat Extractor Hood for S197 and GT350 platforms. You asked, Cervinis listened. This year at the 25th Ford Nationals, they revealed two brand new GT500 Style Hoods. The first up was the 2013 – 2014 S197 Mustang, on a Gotta Have It Green Boss302. This GT500 style hood will also fit your 2012 – 2014 GT500. The fully finished, matte black center louver against the vivid green created a killer track ready appearance. The fully functional louver can be removed entirely, allowing this to be the perfect street to track combo. With aggressive yet subtle body lines and the heat extracting louver, Cervinis went beyond expectations and created the fully finished underside allowing it to be show ready. Guaranteed color matched options will be available for the hood on their site when this product is released. The tentative date for availability on their site is late August. Until then, you can check out all of their other accessories for your S197 on their site. 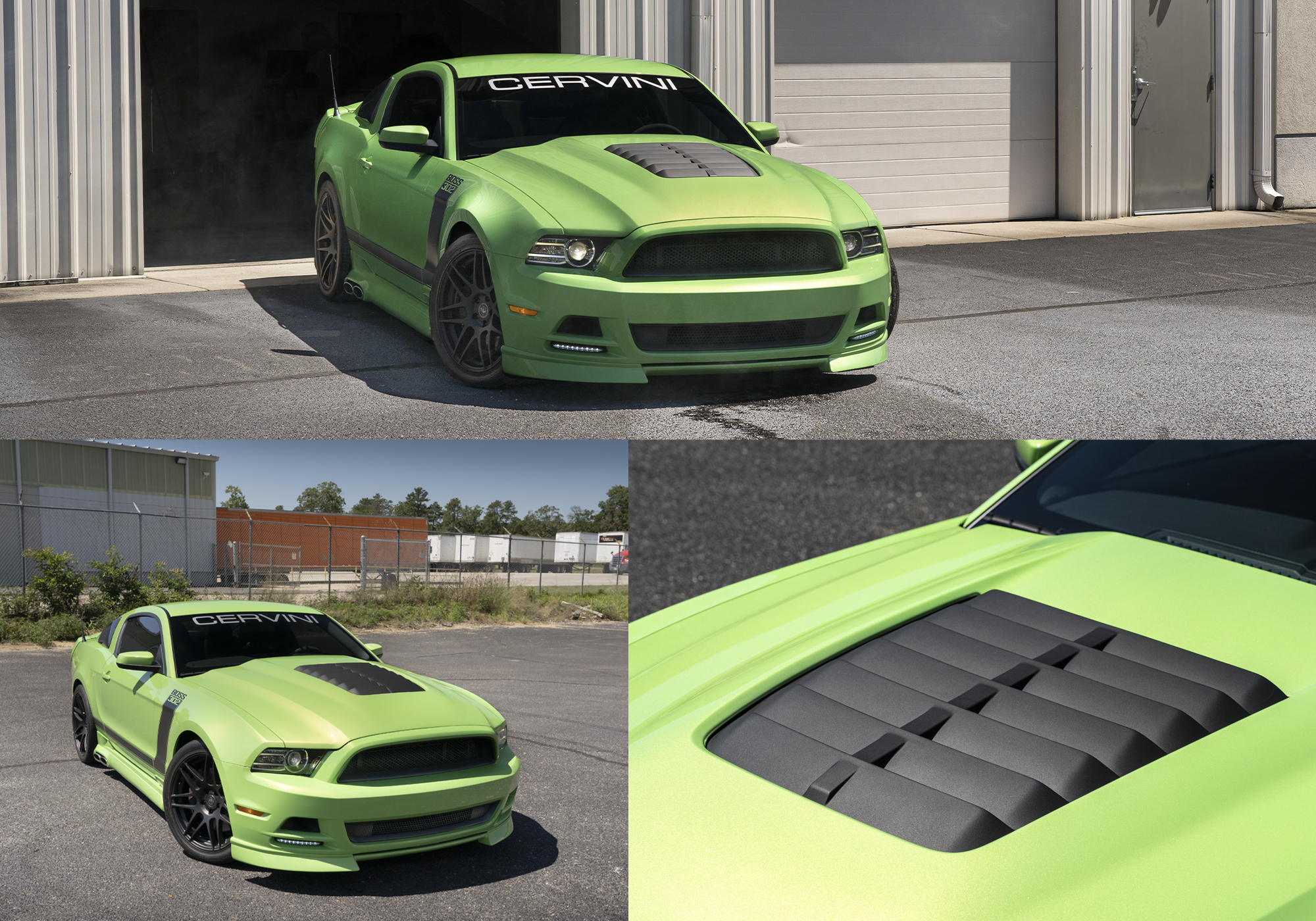 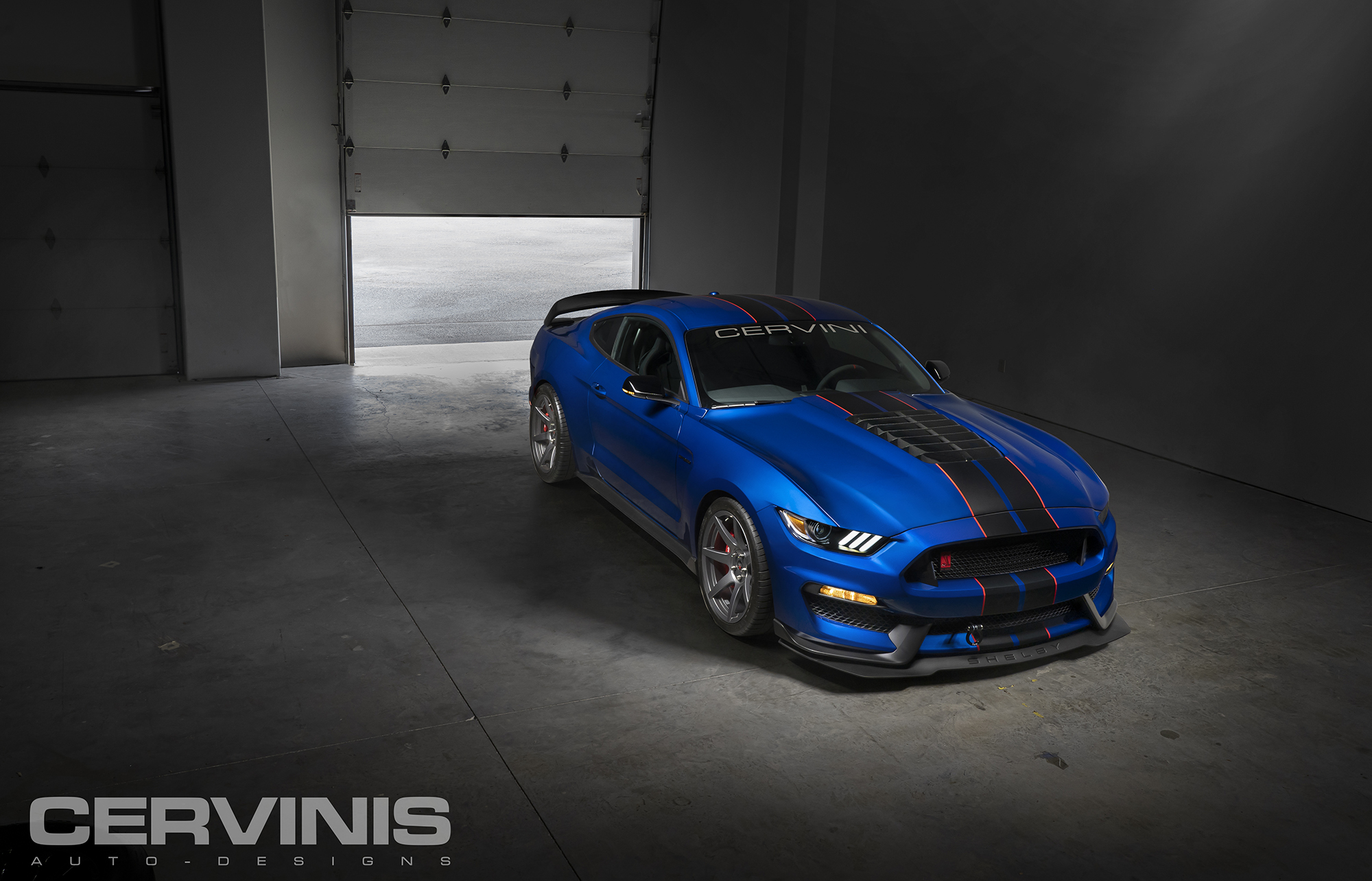 Last to be revealed, but surely not least was the highly impressive GT500 Style Hood for the 2016 – 2020 GT350. With the styling of a 2020 GT500, it is the one minor mod that will make all the difference for your GT350. They kept the functionality interchangeable throughout all of their hoods, allowing you to have maximum use out of the hood and be as versatile as possible. The louver’s rain tray is fully removable, allowing a swift change from street to track. The body lines being continued onto the hood creates the appearance that this was created to be an original factory part with your GT350. Cervini’s will be offering guaranteed color match paint options for all factory color options. The tentative date for availability on their site is expected to be in late August. They set the bar extremely high, we can wait to see if Cervini’s will be creating a larger product line for the GT350’s. 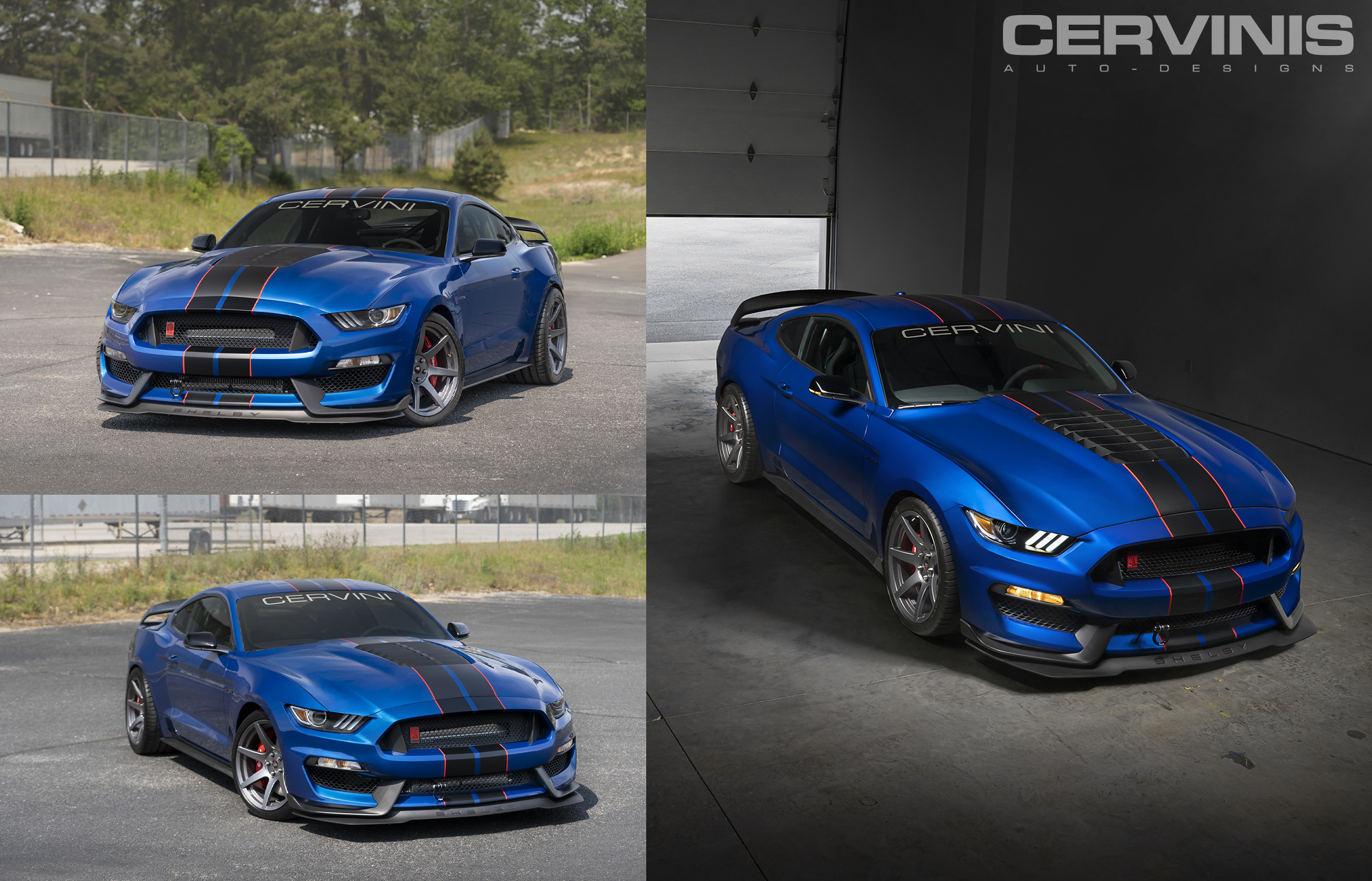 The entire team at Cervinis Auto Designs went beyond all expectations with four new hood styles at this year at the 25th Carlisle Ford Nationals. With exceeding all possibilities that we have thought they would create, they were able to add one more product to your mod list. Cervinis offers the highest quality hoods on the market, with a warranty to back it, that makes it a an easy choice on when choosing your next body components. All newer model products are offered with a guaranteed color match and PPG Limited Lifetime Warranty.All Cervinis parts are made in the USA at our Vineland NJ Headquarters. Our fast free shipping ensures that your parts arrive at your doorstep ready to install.  You can check out their full product line on their site www.cervinis.com.